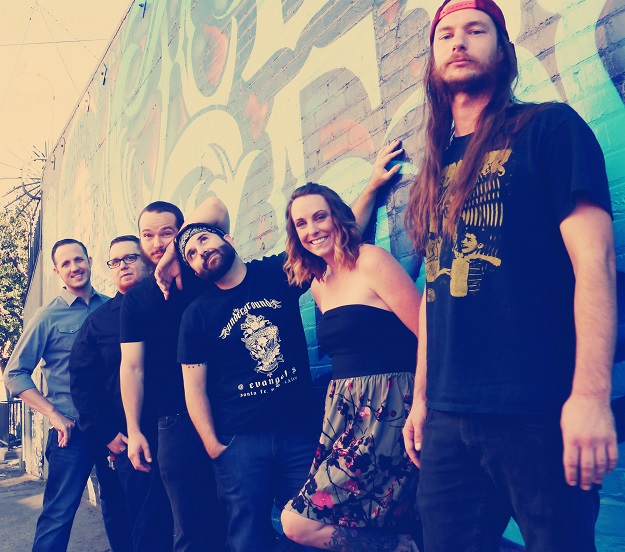 US band, Lexington Field, have just released their brand new album Greenwood. After hundreds of shows and two national tours the band are unleashing the third installment of their lively fiddle rock to the world. We spoke to vocalist, Beau Gray, to get to know a bit more about them...

WHERE ARE YOU FROM?
We are from America's Finest City...San Diego, CA

HOW DID YOU FORM?

We formed in 2009, going from playing Celtic Rock standards in Southern California pubs to writing our own unique style of music. I have been here since the beginning on vocals and guitar. Bryan Hane (guitar) also has been here since day one.  Over the last six years we have gone through some lineup changes to get us to this point - which I think is our most talented group yet. Vincent West (drums) joined the band in 2010.  AJ Belluto (guitar) toured with us in 2012 and then joined full time in 2013.  And, Tom Lazet (bass) and Olivia Buscemi (fiddle) joined the team in 2014.

DESCRIBE LEXINGTON FIELD'S MUSIC IN 5 WORDS FOR SOMEONE WHO MIGHT NOT HAVE HEARD IT BEFORE...
In two words: FIDDLE ROCK.  (That is technically 5 words...nailed it.)

TELL US ABOUT YOUR NEW FULL-LENGTH, GREENWOOD.....
Since our last full length, No Man's War, which we released back in 2013, we have added three new members - AJ, Tom, and Olivia.This rejuvenated our sound.  We started from scratch with nothing holding us back this time.The end result was Greenwood - the heaviest, most rocking album we have ever created.We joined East Grand Records last year and this will be our first release on the label.Very exciting times in the world of Lexington Field!

WHAT IS YOUR FAVOURITE SONG FROM GREENWOOD AND WHY?
My favourite song has to be "The Hitchhiker's Guide Out of Suburbia".It's a personal story of growing up in the suburbs and FINALLY, getting to the city and moving forward in life.With more and more people growing up in that sheltered world, I think the song can be an anthem to someone taking a leap of faith and embracing this crazy, fucked up world head on.

HOW DID YOU COME UP WITH ARTWORK FOR GREENWOOD?
All our album artwork in the past has been done by Jose Pimienta, who is a spectacular artist and friend of ours. But, with this new sound, new members, and I guess you can say, "new band", we wanted to do something different. I took a picture of our rehearsal space, where we wrote the album for over nine months, and added the different colors to it to represent the different influences of all the band members. We wanted something that would catch your eye. In my opinion, mission accomplished.

DO YOU PREFER RECORDING OR PLAYING LIVE?
Recording is stressful. Playing live is awesome. My answer: Playing live.

IF YOU COULD PLAY A SHOW WITH ANY BAND WHO WOULD IT BE?
We have a very eclectic mix of artists that we all would like to share the stage with. Here are the answers from each member:Beau - MxPxBryan - Rise AgainstVincent - Rage Against the MachineAJ - Black SabbathOlivia -  Little TybeeTom - Rocket From The Crypt.


Greenwood is out now! Check it out below:

Email ThisBlogThis!Share to TwitterShare to FacebookShare to Pinterest
Labels: Greenwood, Lexington Field, Up and Coming Bands, Up and Coming Pop Punk Bands

Pop Punk UK
For fans of the Movielife to The Wonder Years. Dedicated to every pop punk lover and band ever.